How to Maximize the Value of Yield Data: Part 2 Explores Common Questions on Calibration

IS YIELD DATA USELESS IF YOUR EQUIPMENT ISN’T PROPERLY CALIBRATED?

This is a common myth, but surely there’s always a bit of truth underlying every popular myth.

In this case, the answer is: it depends on your end goal, says Wallace.

“Whether your combine is reading 60 bushels of wheat or 100, the scale is still there. You can see where yields are strong, average or poor. The numbers might not be correct but the scale is right,” explains Wallace. “If you have a poor zone, you can still use it to ask questions – is it about moisture? Soil? – and figure out the cause of variability.”

However, if growers want to use their yield data to see the results of different of seed varieties or crop treatments, the equipment must be properly calibrated.

“Here, we’re trying to find nickels in a pile of dollars,” explains Wallace.

For example, he has a grower tracking two different varieties of seed. He’s using a split planter to compare the performance of seed that was $250 a bag versus another that cost $300 a bag, but promises higher yields.

Wallace says in this case, the grower needs to know exact figures, so he can determine if stronger yields have justified the higher cost of the seed.

“Now he needs to apply fertilizer,” says Wallace. “Maybe we did the first 10 passes and then increased the amount of fertilizer by 20 percent. I would create this as a separate variety to test the treatments. Then it really starts providing the information you need to make decisions.”

CALIBRATION IS WORTH THE TIME AND EFFORT

If you ask John McGuire of Simplified Technology Services, proper calibration and yield monitor prep has been a “continuous bone of contention in the side of precision ag since the beginning of time.”

McGuire should know – he’s been working in the field, quite literally, for over 20 years. The hurdle he sees is that many growers are concentrating on growing the crop and managing the finances, that equipment calibration ends up on the back burner.

“Their minds are typically not on data and it’s a challenge,” says McGuire. “It’s not a matter of understanding how the information works, but more a lack of understanding of the engineering of the device on the combine, how the sensors are designed. They require multiple points to represent the actual output, and that’s the part the farmers don’t necessarily get.”

According to McGuire, the “well-versed dealers” have enough information to help farmers calibrate, but “a lot of the dealers themselves don’t understand the engineering and they don’t want a situation where they’re making their technology look more complicated than it needs to be, so they stay away from the topic of calibration.”

That’s where consultants such as Wallace, McGuire, Braaten and other precision ag experts come in.

As McGuire explains it, calibration is all about establishing a relationship between sensor output and pounds of grain. “That’s really what you’re doing when you calibrate sensors,” he explains.

McGuire and his partner have an agronomic consulting company that addresses just these concerns. As the ‘data guy’, McGuire says the firm has a good understanding of the hardware/software relationship as it includes farmers, retailers and large national ag companies in its client list, and has in the past sold hardware for partners such as Trimble, Ag Leader and John Deere. These days most of his time is spent providing recommendations to growers in Ohio, Indiana and Michigan. His end goal? Encouraging them to slow down long enough to calibrate their equipment so they can make the most of their yield monitor data.

“If the monitor is not calibrated properly, it will show the farmer the extreme differences but it doesn’t give you a good indication of the actuals,” says McGuire. “When you’re doing a test in the field and you’ve put strips out there, you may be looking for a four to five-bushel different between two treatments, so need to get to this level. Differences in treatments might be small but they can be very valuable.”

At the end of the day, his assessment is:

Why Should I Care About Clean Yield Data?

This is a question many farmers are asking, and Devon Liss is ready with an answer. The Trimble Prod... 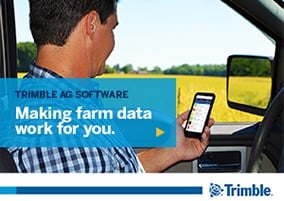